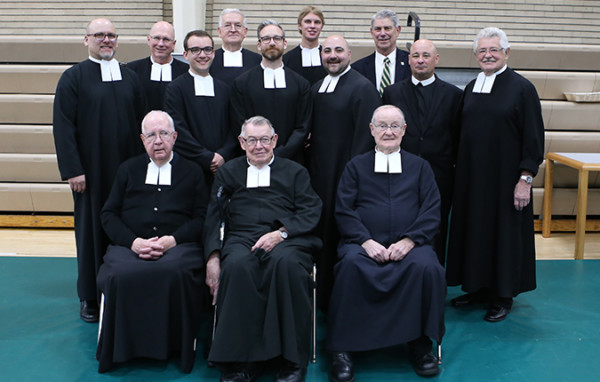 The yearlong Regional Novitiate concludes on July 21 with the five novices making first vows, formally called temporary profession, at the end of their experience.

The three novices from the Midwest District, Brothers Mark Engelmeyer, Matthew Kotek and Dylan Perry, will make vows together July 21 in Mundelein, Illinois, and the two novices from the District of Eastern North America, Brothers Paul Avvento and Steven Barbaro, will make vows together on July 28 in Lincroft, New Jersey. All the novices will be present at each other’s vows.

The Novitiate experience serves as a time of formation and preparation for the Brothers in their vocation.

“During the novitiate, the novices have had the opportunity to know themselves better, to study the life of the De La Salle Christian Brother in depth, to deepen their own prayer life and spirituality,” said Brother Thomas Johnson, FSC, Novitiate director.

Brother Thomas continued that the Novitiate also focused, “on the ministry of Lasallian education, which has prepared them to understand and experience the Brother’s vocation as religious educators.”

Each Novitiate group establishes a distinct communal character, one Brother Thomas describes as having, “initiative in both community and ministry; they are voracious readers and good questioners in discussions and classes. They enjoy each other and gatherings of Brothers and Lasallians.”

Emphasis on the Lasallian charism and spiritual life is a component of the Novitiate experience that the Brothers will carry with them.

“During the Novitiate, I’ve had the opportunity to open myself up to the depth of the Brother’s charism and allow it to touch all aspects of my life. I have been able to strengthen my relationship with God,” said Brother Paul. “This opportunity has allowed me to internalize the call to be Brother and the opportunities and joys that come with that call.”

In the coming weeks, the novices will be transitioning to their new communities and ministries for the year ahead:

Please continue to pray for the Brothers as they conclude their Novitiate experience, make first vows, and transition to their new communities and ministries.