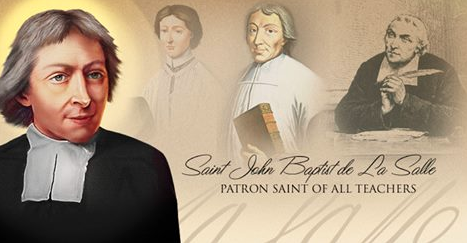 Founder, Institute of the Brothers of the Christian Schools

Saint John Baptist de La Salle established a unique group of lay religious men dedicated exclusively to education – the Brothers of the Christian Schools. Today the educational movement that he began continues to inspire educators around the world. 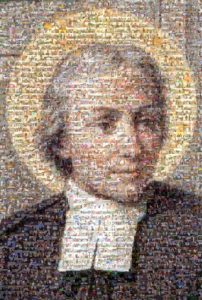 Born in Reims, France, into an influential family on April 30, 1651, John Baptist de La Salle decided early on to become a priest. His parents died when he was 20 and De La Salle became responsible for the family estate and took care of his six younger brothers and sisters while completing his studies.

He was ordained in 1678, and two years later he received his doctorate in theology. While serving as a Canon in the Cathedral of Reims, a chance encounter with a layman establishing schools for poor boys set him on a new life path.

Gradually De La Salle became involved in the project and soon assumed leadership of a group of rough and barely literate teachers possessing little preparation for their craft.

At that time a few people lived in luxury, but most of the people were extremely poor: peasants in the country, and slum dwellers in the towns. Only, a few could send their children to school; most children had little hope for the future. De La Salle was moved by the plight of the poor who seemed so “far from salvation” either in this world or the next, he determined to put his own talents and advanced education at the service of the children who were “often left to themselves and badly brought up.”

God Sets Him on a New Path

His first step on this new path was to invite the teachers into his home for a retreat and some basic teacher training. Later he moved with the teachers to a new house, renounced his Church position, gave away his wealth, and formed the community that became known as the Brothers of the Christian Schools (also known as De La Salle Christian Brothers). God, he said, led him “in an imperceptible way and over a long period of time so that one commitment led to another in a way that I did not foresee in the beginning.” Church authorities resisted this new form of consecrated life, and the educational establishment resented the Brothers’ innovative methods and their insistence on educating people regardless of their ability to pay.

He then understood that God had led him into an unforeseeable undertaking, a new form of religious life, a community of consecrated laymen to conduct gratuitous schools “together and by association.” In 1725 the Institute received the formal approbation of the Church in the papal bull: “In apostolicae dignitatis solio.” 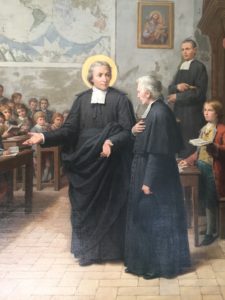 In 40 years, De La Salle and his Brothers succeeded in creating a network of schools throughout France that featured the teaching of reading in French (instead of Latin), students grouped according to ability, the integration of religious instruction with secular subjects, and well-prepared teachers with a sense of vocation and mission. De La Salle also pioneered programs for training lay teachers, Sunday classes for working young men, and one of the first institutions in France for delinquent youth.

The Mission Carries On

De La Salle died near Rouen on Good Friday, April 7, 1719, with 23 active communities and 100 Brothers continuing the mission he set forth. He was canonized a saint in 1900 and named by Pope Pius XII, the Patron Saint of Teachers in 1950. His charism, educational spirituality, and extensive writings inspired Catholic educators in his own time and continue to inspire educators from many traditions today.

At the present time, there are Lasallian schools in 79 different countries around the globe.

Our Call as Educators  Our Community