Experience of the Lasallian mission with young people 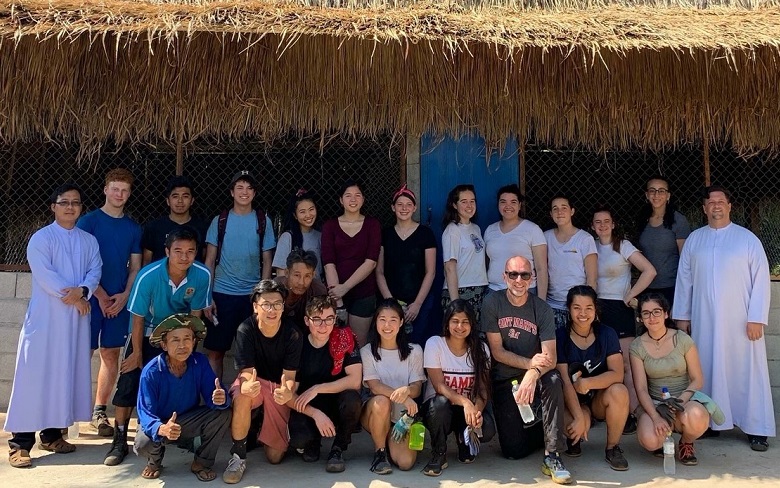 In early March, a group of students and adults from Saint Mary’s College High School in Berkeley, CA visited and volunteered at the La Salle Bamboo School in Sangkhlaburi, Thailand.  The service immersion trip was part of Saint Mary’s annual Enrichment Week.

The Bamboo School, along with the Parmenie Learning Center, provides education for approximately 400 Burmese refugee children on the border of Myanmar and Thailand.  They and their families have been displaced from Myanmar due to an ongoing civil war and forced to create and live in makeshift villages along the border.

The Saint Mary’s delegation was made up of 16 students and faculty members Azure’D Nunley, Greg Kelly, and Brother David Caretti, FSC.  According to Brother David, the idea for the trip was sparked by the travels of Brother James Joost, FSC, Auxiliary Visitor for the San Francisco New Orleans District.

“After Brother James visited,” Brother David recalled, “he inspired a conversation at Saint Mary’s where we ended up making the journey to Sangkhlaburi.  While I had certainly heard about the unique and amazing work the Brothers in Thailand are doing at the Bamboo Project, I never really thought I’d have the opportunity to witness it first-hand and participate to a small degree in their work.”

The Saint Mary’s students’ involvement with the Bamboo School actually began earlier in the school year.  Knowing that they would be helping to build a chicken house there, they prepared for their trip by learning basic construction skills and practicing them in an area on campus.

Once at La Salle Bamboo, the group worked in the heat and humidity (March is the start of the hot season in Thailand) to complete the construction project.  It was valuable and rewarding work, with the group even getting to witness almost immediately the benefits of the newly-built coop.

“We thatched the roof and walls, did some light masonry, and fenced the walls in,” Brother David explained.  “The day after the chickens arrived, they were already laying eggs, so the project was off to a great start!”

While at the school, the Saint Mary’s students also taught conversational English, did gardening, helped with minor repairs to Bamboo students’ homes, and made many new friends along the way.

“Back at the Parmenie campus,” Brother David said, “We spent time with the girls of the Blue Sky Home, young people abandoned by their parents and families.  Our connection with them was instantaneous, and our students discovered we were more similar than different, with the same kinds of dreams for the future and the same desire to connect in friendship.”

Each year during Saint Mary’s Enrichment Week, every student chooses a learning experience that is of particular interest and in which the student participates throughout the week following Christmas break.  The curriculum for Enrichment Week is developed by the faculty and contains a mix of academic, travel, career exploration, and recreational classes.

In the case of the Saint Mary’s immersion trip to La Salle Bamboo, the most important lesson for the students and faculty members may have been their experience of the span and impact the of the Lasallian mission to which they all belong.

“I left Sangkhlaburi,” Brother David reflected, “with an overwhelming sense of gratitude for my Brothers and the entire Lasallian Family.  Although we do amazing work in our own localities, we sometimes can be very heads-down.  It is inspiring to know that our Brothers and members of the Lasallian Family are doing exactly the same, as far away as Thailand.  I hope that the work I do here in our District contributes well to the wider Lasallian Mission.”