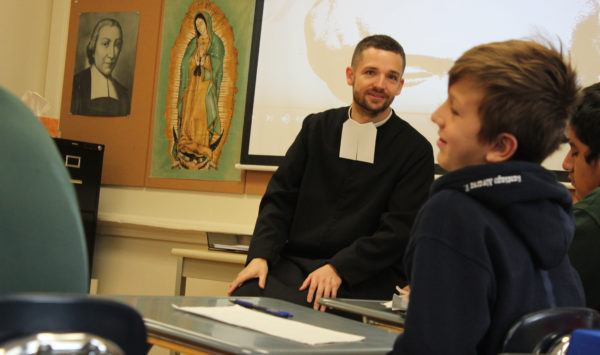 The United States Conference of Catholic Bishops (USCCB) has announced that Brother Javier Hansen, FSC, of the District of San Francisco New Orleans (SFNO) of the Institute of the Brothers of the Christian Schools (De La Salle Christian Brothers) has been named as a youth delegate to the 2018 Pre-Synod Gathering.

Brother Javier will be one of three youth delegates to the Pre-Synod, which will convene March 19-25 in Rome, Italy. The delegates were selected on the basis of their local and national connections to the life of the Church, their work with other young people, and their representativeness of the cultural and vocational diversity of the Church in the United States.

Brother Javier, 27, currently serves as a religion teacher at Cathedral High School in El Paso, Texas.  Speaking about his selection, he said,

“I believe I offer the perspective of many young religious in this country and those who are currently discerning religious life.  I not only will represent the people of my generation but also the young people I interact with every day in the classroom.”

SFNO Visitor Brother Donald Johanson, FSC, said of the news, “We are happy and excited for Brother Javier and the extraordinary opportunity that he has received. We know that the Pre-Synod will be a powerful experience for him, and we look forward to his participation and contributions.”

Called by the Holy Father Pope Francis, along with the Office for the Synod of Bishops, the 2018 Pre-Synod Gathering was conceived as a way to listen directly to the voices of young adults around the world in advance of the Church’s 2018 Ordinary Synod, Young People, the Faith, and Vocational Discernment, which will take place in October at the Vatican.

“Young people. Faith. Vocational discernment. This is shorthand for the mission of the De La Salle Christian Brothers, and I heartily support the Bishops’ sending Brother Javier, a man of passionate and joyful service, to help prepare for the Synod. He’ll not only bring the hard-earned wisdom of a teacher dedicated to walking with young people in their encounter with God, but the insights of his own encounter.”

See the official Vatican website for the Synod and the Pre-Synod.

See the official USCCB page for the Synod and the Pre-Synod.

from the Brothers of the Christian Schools, District of San Francisco New Orleans