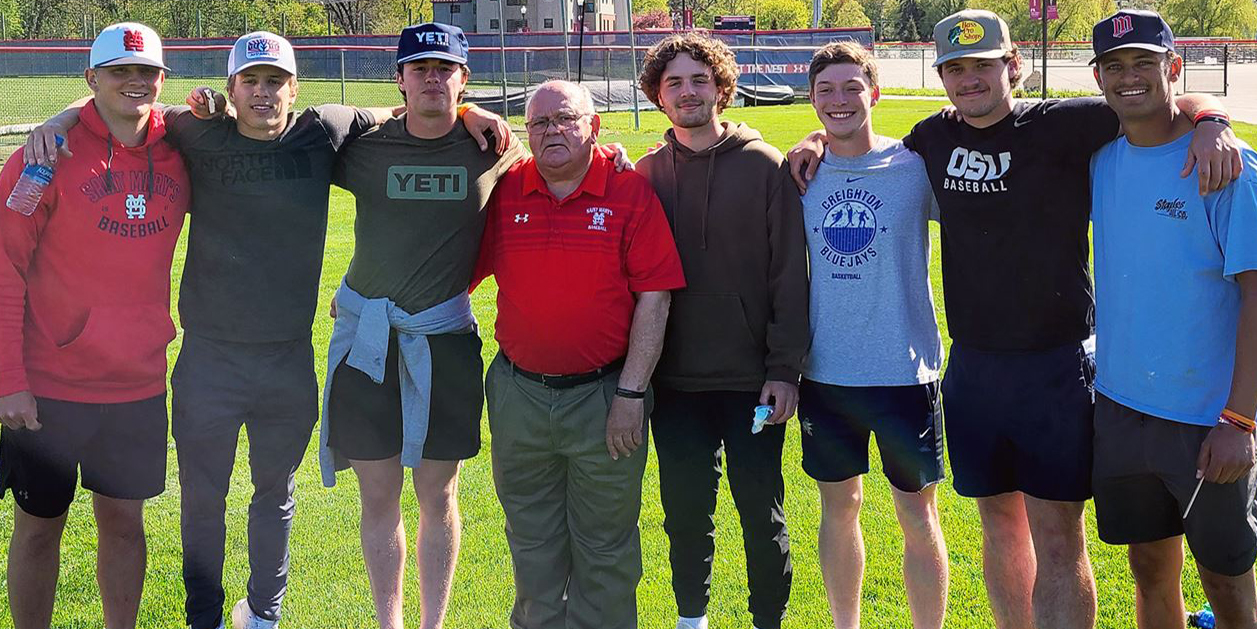 Originally published at saintmaryssports.com, the athletic website for Saint Mary’s University of Minnesota.

The Saint Mary’s University baseball team heads into its three-game conference tournament qualifier series against Augsburg this weekend as the No. 3 seed — thanks to a third-place showing during the Minnesota Intercollegiate Athletic Conference regular-season.

In fact, according to coach Nick Winecke, there isn’t a person on the Cardinal roster who hasn’t played a key role in the Cardinals’ success this season.

Yet, ask anyone in the program who the true, unsung hero is, and one name resounds above all others — Brother Frank Carr, FSC.

“There is not a bigger piece to our baseball family puzzle than Brother Frank,” said Winecke. “Having him as our baseball liaison, as a member of our coaching staff, has been great for me personally. He’s someone I can lean on as a mentor and a friend.

“But above all else, he’s such a good person — and a phenomenal role model for a group of 18- to 22-year-old young men to be around,” Winecke added. “The guys just love seeing him every day — where it’s five minutes at practice, on the bus heading to games, or with us on our spring trips … he’s just a friendly face and a person they all love to be around.”

Pitching coach T.J. Oakes couldn’t agree more. “There is not a better human being out there than Brother Frank,” he said. “He embodies everything this program is all about. He means so much to all of us, and shows us how to truly treat people right on a daily basis.”

“Brother Frank brings energy to a lot of the guy and the team as a whole — from his positivity, good heart, and of course, his great cookies,” Gilbertson said. “He is the type of person I think many of us would like to be like when we are older in the sense of his kind heart and great attitude.”

And to think, Winecke and the Cardinal baseball program’s association with Brother Frank started with a simple bus ride — and has blossomed into a relationship that everyone associated with Saint Mary’s baseball truly treasures.

“I remember we were going to play Hamline at CHS Field (in St. Paul) and Brother Frank mentioned that he was going to drive up and watch us play,” explained Winecke. “I told him he can ride on the bus with us, and ever since, he’s ridden the bus. He’s become a part of our staff and in so doing, become a part of our Cardinal baseball family. He’s been a humongous piece to our puzzle.”

According to Winecke and Gilbertson, Brother Frank takes on many roles — including doing all the “little things” that may slip through the cracks among the rest of the coaching staff, and keeping the Cardinals well-fed by sharing his culinary skills.

“We always talk about how everything we do in the program has value — and Brother Frank takes that to another level,” said Winecke. “He embodies the legacy of what Cardinal baseball is all about, and it’s hard to put into words just how much he means to all of us.”

“What makes Brother Frank so special is the calmness he brings to everyone — he is the easiest person to have a conversation with,” Gilbertson said. “And, of course, we all love his cooking. Brother Frank gives all us players that sense of home when he cooks. We don’t get to go home too often during the season or to see our families, so those home-cooked meals throughout the school year really mean a lot.

“He is also a huge connection between the team and our family members,” Gilbertson added. “At almost every game you can see him talking to our parents and siblings.”

The connection Brother Frank has created means as much to the parents as it does to the players.

“Brother Franks is the most-recognized fan at almost every SMU baseball game. Other than our coaches and players, Brother Frank is easily the most-reliable fan in the stands,” said Troy Tepp, father of senior outfielder Andy Tepp. “That consistency is very stabilizing and reassuring — regardless of whether you’re a new freshman or an experienced senior to the program.

“Brother Frank is incredibly passionate about the emotional success and well-being of every player,” Tepp added. “He has fine-tuned the ability to connect personally with each year’s players. He quickly gains their trust and confidence of those players. He truly seems to enjoy those close relationships with the team and, most importantly, the players respond very well to Brother Frank’s sincere commitment to them.”

The impact that Brother Frank has made on the Cardinal baseball program is immeasurable, but in the words of Gilbertson, one thing is certain — “Brother Frank is one of a kind … there is no one better.”